Warning: "continue" targeting switch is equivalent to "break". Did you mean to use "continue 2"? in /nfs/c07/h04/mnt/106583/domains/thedivingbug.com/html/wp-content/plugins/revslider/includes/operations.class.php on line 2695

Warning: "continue" targeting switch is equivalent to "break". Did you mean to use "continue 2"? in /nfs/c07/h04/mnt/106583/domains/thedivingbug.com/html/wp-content/plugins/revslider/includes/operations.class.php on line 2699

Warning: "continue" targeting switch is equivalent to "break". Did you mean to use "continue 2"? in /nfs/c07/h04/mnt/106583/domains/thedivingbug.com/html/wp-content/plugins/revslider/includes/output.class.php on line 3581

Warning: "continue" targeting switch is equivalent to "break". Did you mean to use "continue 2"? in /nfs/c07/h04/mnt/106583/domains/thedivingbug.com/html/wp-content/themes/jupiter/framework/includes/minify/src/Minifier.php on line 227
 The Last Dive

The Last Dive is a story about a father and son’s dangerous obsession to capture a piece of history. Bernie Chowdhury, the author, tells the true story of a father-son dive team in a way that grips the reader and doesn’t let go. His story is a first-hand experience knowing these men personally. He met them, spent time with them and came to be aware of their sometimes tumultuous relationship with each other and questionable diving skills. He describes their personalities and temperaments in a way that allows the readers to feel as if they know them just as well. Bernie’s credibility is unquestioned as an instructor and extreme cave explorer in Iceland. He is no stranger to the plight of this family nor the intricacies of this family dynamic.

Chris and Chrissy Rouse fell in love with the sport and the danger of deep sea diving in the late 1980’s/early 1990’s. They often took long weekend trips to the deep wrecks off the New Jersey coast. During this time few were qualified, knowledgeable and daring enough to take these types of expeditions. They became particularly intrigued when a World War II German U-boat was discovered at a depth of 230ft and felt the need to be among the first to provide proof of its validity. In seeking fame, this fascination proved to be their demise.

Bernie wrote the book in 1998, six years after the Rouse’s deaths. He says the passage of time made it no less difficult to recall and relive the awful tragedy. The story is a cautionary tale of a parent-child relationship and how it influenced critical decisions made during this dangerous, thrill-seeking expedition.

I really enjoyed reading this book and couldn’t put it down. I found the book to be understandable and captivating for non-divers and divers alike. If you are looking for an engaging and thrilling book, you will not be disappointed with The Last Dive. 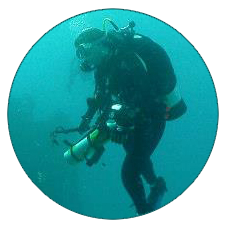 Welcome to my new diving blog. My name is Debby. Once a week I look forward to sharing the knowledge that I've learned and experiences that I've had while diving in South Florida over the past 7 years. Although I have many dive friends that have been enjoying this sport much longer than I, my hope is to spark some interest from people who only dream of it, help and educate new divers and share thoughts and interesting times with my fellow avid divers. If I can give back to the local dive community and businesses that I am so grateful for by raising awareness, then I have succeeded in showing my appreciation for all who have helped me on my journey. If you enjoy reading my blog, please share it with your friends. Feedback is always welcome.

The Diving Bug - Copyright All Rights Reserved © 2017
Contact Us

We're not around right now. But you can send us an email and we'll get back to you, asap.